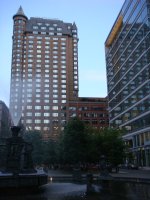 This year's Casino Affiliate Convention held August 27 – 28 at the Intercontinental Hotel in Montreal, Quebec was considerably smaller than its past conferences, primarily due to the passage of the US Anti-Online Gambling Law in 2006.

Regardless, the convention was well-received by those in attendance – comprised in large part of never-say-die gaming affiliates who moved with the times and into the European space in order to continue their lucrative gaming affiliate businesses when Bush cracked down on online gambling.

However, because gaming affiliates earn a portion of the revenue generated by players who signed up for casino sites through their affiliate sites, these affilites had to start building player pools again from scratch.

As such, many of the affiliates at the Convention had started working in, or were still actively seeking new lucrative niche markets into which they could expand.

During my second speaking gig of the convention, the ‘THE Adam Anhang Memorial Final Panel Debate‘ (aka ‘The Beer Session), 2 potential niche markets were discussed at length, the viability of which I had to vigorously concur.

Those markets are Cell Phone / Mobile Dating and Skill Games.

To bring the point home about the lucrative nature of the skill gaming niche, Marc Lesnick, the Casino Affiliate Convention organizer, intends to hold a skills gaming conference in Las Vegas next year.

Game types in the skills or ‘soft' games category include board, word, puzzle and arcade games.

Specific skill game examples include backgammon, rummy, Sudoku, Mahjong and Scrabble. I'm a HUGE fan of the latter with an average score of 300 – just HAD to share that!

Income Access – Montreal-based Income Access, owned and operated by my friend Nicky Senyard (who also owns ShareResults.com) has skill game offers by Mahjong Time (2-tiers, pays up to 35%) as well as Ladbrokes Bingo and Games. Ladbrokes pays 30% tiered commission on the revenue generated by your players.

From their site: “Most soft games affiliate programs offer a percentage commission ranging from 10% to 50%, often tiered based on the total revenue generated by the soft games provider.

As an alternative form of payment, some soft games affiliate programs give their affiliates the choice of earning a flat fee per player instead, also known as a Cost-per-Acquisition (CPA) commission, ranging from $50 to $200.”

Limbo, a CJ merchant, has 2 games, Limbo Unique and Limbo Grab in which your visitors can win cool prizes – HDTV's and the like – online or through their mobile phones. Pays 2 bucks per new member signup.

BetonBattles, another CJ merchant, hosts multiplayer skill-based tournaments for players/members. Players compete with each other to determine a ‘winner'. BetonBattles claims to be the world's highest paying Internet based skill gaming website. They do offer a nice commission rate – $5 per each each real player registration and were offering new affiliates a chance to win a trip for TWO to Vegas to joing them at the World Series of Battles. Nice incentive.

King.com – Based in Germany, has a portfolio of more than 60+ online-games including skill games such as “Who wants to be a millionaire?”, “Deal or no Deal” and “Luxor”. IAlso offers UK users a range of licensed soft games ilike “Bingo”. Pays a whopping £18 GBP commission for each new registered money-player.

These are but a few of the merchants and networks playing in the skill games category. For more ideas and opportunities in the skill gaming niche, review CJ's Betting/Gaming category and search for ‘skill game' and ‘affiliate' on Google.