With almost 5,000 ‘friends' from both my business and personal life, it's not too often that I get really upset by what anyone does or says on Facebook.

My Facebook timeline is open to everyone and all opinions… and although I argue a lot about politics with some folks, it's rare that I would ‘unfriend' anyone just because their opinion differs from mine.

It's good to share. We all learn something. Maybe a little, maybe a lot.

HOWEVER, and that is a BIG however, what I do NOT appreciate, is being added to groups, especially those that I would never choose to join, had I been sent an invitation.

I was offline for a few days while camping in the ‘outback' of New Mexico.

During that time, Facebook personality “____” added me to a group called ‘www.WatchPornandMakeMoney.com'. 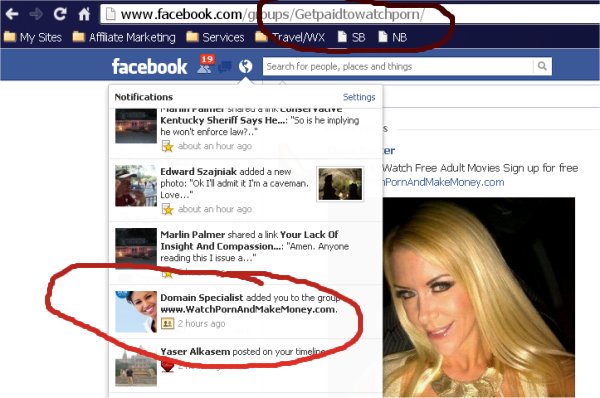 Ya right… that's a group I want my family and close friends to think I actually chose to join.

“Domain Specialist” loses, because our 136 ‘mutual friends' get to hear about his/her REALLY stupid move in adding me to this ridiculous group… as do YOU… and hopefully, your friends. 🙂

Granted, not every group add is quite so extreme, but trust me, adding people to Facebook groups they don't themselves choose to join is a very bad move overall.

I personally have never remained a member of a group to which I was added by some so-called ‘friend'.

Moral of the story – Friends don't add Friends to Facebook groups unless they ask first.

Doing so could ruin an otherwise good business reputation if you add the ‘wrong' person… i.e. someone like me. 🙂

Treat all your Facebook friends with respect – personal and business.

This website uses cookies to improve your experience while you navigate through the website. Out of these, the cookies that are categorized as necessary are stored on your browser as they are essential for the working of basic functionalities of the website. We also use third-party cookies that help us analyze and understand how you use this website. These cookies will be stored in your browser only with your consent. You also have the option to opt-out of these cookies. But opting out of some of these cookies may affect your browsing experience.
Necessary Always Enabled

Any cookies that may not be particularly necessary for the website to function and is used specifically to collect user personal data via analytics, ads, other embedded contents are termed as non-necessary cookies. It is mandatory to procure user consent prior to running these cookies on your website.