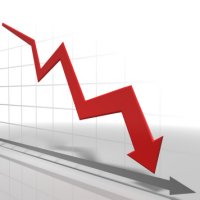 When I started affiliate marketing back in early 1998, getting paid in U.S. Dollars was a huge bonus to me as a Canadian resident.

Even if my merchants' product prices and commission rates remained the same, I got a raise simply by virtue of fluctuating foreign currency rates.

Unfortunately, the U.S. greenback has been slipping steadily against other currencies since early 2002, and on January 14th, 2005, it was worth $1.20 CAD.

Affiliate marketers in many other parts of the world faced the same scenario.

Here are some examples of how the US dollar has been performing against various currencies since early 2002.

Those are fairly sizeable drops across the board… and a pretty depressing situation for non-U.S.-based affiliates who earn their incomes in US dollars.

However, there are a couple of things affiliate marketers can do to protect their affiliate income from these disastrous declines.

The first option is to work about 25-35% harder to bolster revenues to 2001 equivalent values.

However, because I'm basically lazy, working harder is never my first choice.

The second option involves using foreign exchange rate changes to your advantage by selling products offered by merchants located in your own country, priced in your own currency.

For example, although Canadians are less resistant to purchasing in U.S. dollars now that the Canadian dollar is so strong, they still hate to see a $120.00 charge on their credit card for a $100.00 item. Logic aside, something tells you that a buck should be a buck, and anything more feels like a rip-off.

The primary benefit of promoting ‘local merchants' is to help your visitors save money by reducing shipping costs and eliminating customs duties on goods imported from the U.S. Basically, most of us prefer to shop locally if we can get the same product at the same or lower price.

Your task then is to find merchants that price products and pay their affiliates in your own currency.

That unfortunately is still easier said than done.

The pickings were pretty slim when I searched Google for “Canadian” “affiliate programs”.

A site that listed itself as a directory of Canadian affiliate programs – wasn't.

Furthermore, most of the Canadian merchants that set Canadian dollar prices on their sites, either pay their affiliates in U.S. dollars, or are affiliated with networks that pay affiliates in US dollars.

U.K. affiliates will have an easier time finding U.K.-based merchants that pay in Pounds Sterling.

Check out the the following UK affiliate networks and directories:

Here's something to watch for if you decide to affiliate with merchants who work in your own currency.

You’d lose money each time the commission went through the exchange process.

To avoid being penalized by currency exchanges before the commission hits your bank, I suggest setting up a separate Commission Junction account just for affiliations with your ‘local merchants'. Be sure to set the ‘functional currency' on that account to your country's currency.

U.S. affiliates can also take advantage of drops in the U.S. dollar by selling for foreign-based merchants. When or if the U.S. dollar drops, you will actually get a raise on each of those promotions.

Expand your reach by taking advantage of any and all opportunities at home and abroad. It is the WORLD-WIDE web after all.