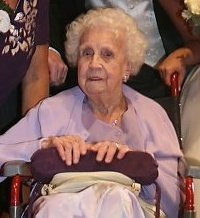 Do you want to get a lot of Facebook friends fast? Then you need to stand out – just like Ivy Bean.

At 102, Mrs. Bean is the oldest person on Facebook, joining after she heard her caregivers talking about a 97-year old Facebook member in France. Bean posts news and video about herself, including the gold medal that she recently won throwing frisbees during her nursing home's “Over 75 Olympic Games”.

Since Ivy's status as the world's oldest person on Facebook broke in the media, she's been getting LOTS of friend requests. At time of writing, Ivy Bean has 8,504 fans and 4849 friends. All those requests are apparently hard to handle, according to an update posted by one of her cargeiverson August 15th:

I would just like to take this opportunity to thank everyone for their friend requests and all the lovely messages left for Ivy, we are doing our best to accept everyone's requests but have had over 8000 today. Ivy will be back on Facebook tomorrow. Look out for her next week on This Morning and Richard and Judy. Many thanks Mariessa

8000 Facebook friend requests! Zowee! Obviously, having a claim to fame that gets media attention is pretty powerful stuff in terms of social marketing.